Cepsa presented in the Port of Huelva the first multi-product marine fuel supply vessel in southern Europe. The vessel, based in the port of Huelva, will provide ship to ship Liquefied Natural Gas (LNG), in addition to traditional fuels: fuel oils and diesel.

State-of-the-art technology has been used in its construction including a new fuel measurement system, based on Mass Flow Meters technology, which guarantees the accuracy in the supply of fuel to vessels.

The new multipurpose vessel (OIZMENDI), which will operate in Huelva, has an LNG load capacity of 600 m3, 1,900 tons of fuel oil and 470 tons of diesel.

This new initiative is part of the CORE LNGas Hive project, launched by the European Commission to promote the use of gas as a fuel for transport contributing to the reduction of CO2 emissions in the Atlantic and Mediterranean European maritime corridors.

The Company starts supplying LNG ship to ship, consolidating its leadership in bunker supply in Spain, where Cepsa sells more than 11,000 tons annually, representing a market share of over 50%, with a milestone that strengthens Cepsa's position at a national and European level.

At the presentation ceremony, held today in the Port of Huelva, Alberto Martinez-Lacaci, Cepsa’s marine fuel director, said: "The new supply vessel provides great flexibility to meet the needs of our customers, as we can provide traditional marine fuels alongside more innovative fuels in the same vessel, such as liquefied natural gas, covering the entire value chain and providing the energy that each client requires.”

Cepsa begins its maritime gas supply operations in response to the anticipation of increased demand for this type of fuel, which has a lower environmental impact. This type of gas has the greatest potential for growth in the energy market for global maritime transport due to its safety, the abundance of this resource, and lower price. The Cepsa Energy 2030 Outlook research project foresees an increase in the penetration of liquefied natural gas of up to 15% by 2030.

Meanwhile, Cepsa anticipates changes in the European emission control regulations where the International Maritime Organization (IMO) has set at a limit of 0.5% of sulfur in bunker by 2020. In this regard, LNG generates approximately 30% less CO2 emissions than traditional fuels and eliminates sulfur oxides emissions (SOx).

The new vessel for the mixed supply of marine fuels strengthens Cepsa's leadership in the bunker market in southern Europe, as, together with its operations in the ports of Las Palmas, Tenerife, Barcelona, Algeciras and Gibraltar and the international ports of Fujairah (United Arab Emirates) and Panama, the Company now has reached a new milestone in the bunker market at European level with the promotion of more sustainable and lower environmental impact fuels such as LNG.

During 2017, Cepsa carried out more than 6,000 ship to ship operations around the world, and supplied more than 4 million products. The company, together with the new LNG, provides all types of fuels for vessels: RMK500, LSFO380, HSFO380, MGO and intermediate IFOS. 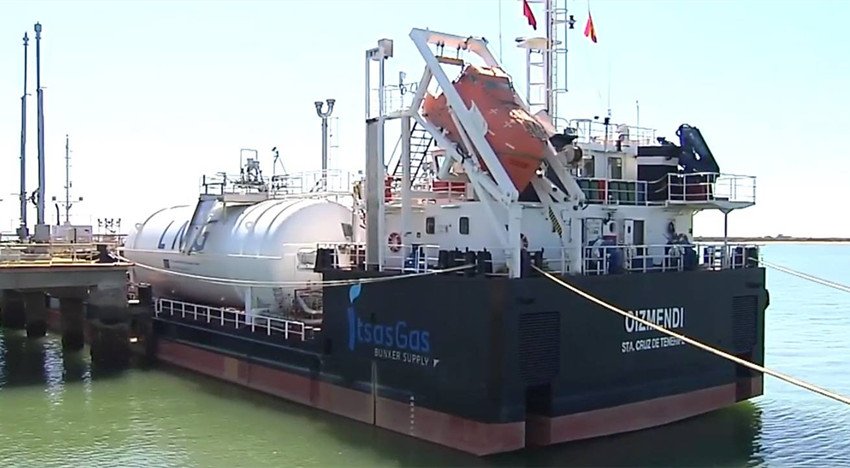